Deity and the Divine– This will be the third week’s topic every month in this project so there will be ample time to cover all of the patrons in various fashions. This one, though, goes out to Yemaya and Poseidon. I embarked on a mixed media art piece a bit over a year ago and completed it recently. It is named _At the Beach_ and it represents my core deep love of the sea and it is also a devotional piece to my sea Deities.

You’d think with that kind of time it would look a lot more full. Ha! No. There was a large spiking learning curve involved. I put on and removed more things than it ended up having on it. Attaching heavy items to muslin, painting on muslin (which originally was pastels and fixative – pro tip, that doesn’t work on muslin), fishing line and thread, and making and ditching various forms of netting that eventually were ditched for fishing net actually made for the purpose.

I learned after the first six months where I pulled 10’s of things back off it to add a wee piece, look at it, stand back to see the whole, and then walk away for a day or so to see if I was still keen on it. This added bunches of time. As did walking away from it completely in a fit of frustration last summer and not returning to it until this past Autumn.

It is about  2 yards of fabric, measuring 43″ across and 33″ high, doubled and tripled in places. It has glass beads, buttons, hand sewn fabric pieces, an abundance of yarn, sequins, seashells that I collected at the beach, a sand dollar a friend collected from her West Coast beach, gifted shells from another friend, sand from my favourite beach in Delaware, a few beads gifted to me at my Feri initiation, along with the painted water. I adore it. And I adore it in spite of others likely looking at it and going, “buh?” It fills my heart with such Joy! 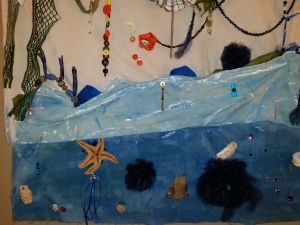 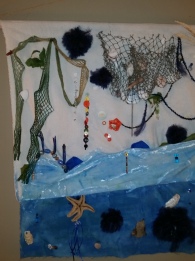 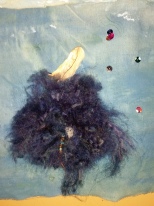 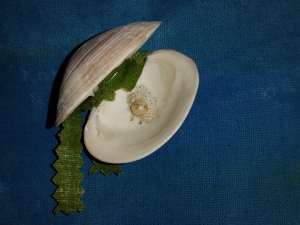 My Etsy Shop – Essentials by PJ